A case where automation made sense.

Having an example where automation made sense could be helpful. It may shed some light on what to look for and reasons to move to automate a process or part in general. I will have to limit the detail a bit to protect the parties involved and respect their wishes. But in a general sense it gives a picture of what was automated and the results. 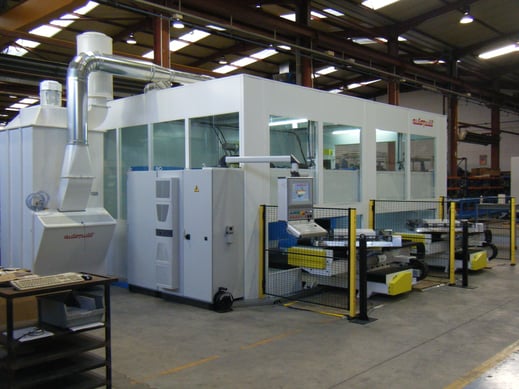 The application in question was to polish raw aluminum to a mirror finish. The parts were the surrounds for the grill on the front of commercial trucks. In this case there were four part numbers but a high volume.The parts were being finished by hand employing a small army to meet the finished part demand. The goal was to limit prep work and get the machine to take the finish as far as possible as quickly as possible.

In this case the brute force of a large CNC machine was the best way to get the power needed to run a wide buff and get the cut needed as quickly as possible. Then to meet the speed needed and provide some overhead in processing two parts at a time was decided. 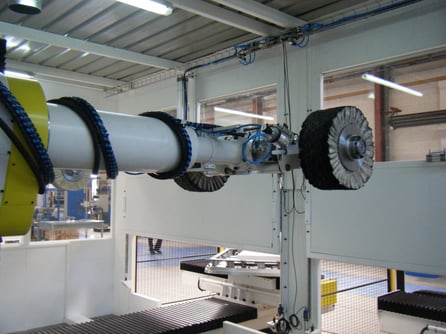 Initial results were that we could take the raw material to a good mirror finish. The issue was small marks from handling and other operations up stream. Time was spent looking at the up stream issues to help reduce the finishing needed. While major improvements were made it did not solve every thing. We then looked at automating the touch up work as prep. In the end the defects were very minor and not present on all parts. For this reason it did not make sense to bring in an additional operation for intermittent prep work. The operator would have some time while the cycle was running to touch the random spot that needed to be sanded. This was chosen as the most cost effective option.

The results were a cycle time under 15 minutes to produce two fully polished parts with one operator. The operator could touch any very bad spots or heavy handling marks by hand to get the next set ready while waiting on the current set. There was a cutting step with a more rigid buff and compound followed by a softer buff and lighter compound. This was able to produce a polished finish that was better than the parts finished by hand. So much so we ended up increasing the speed and reducing the finish quality a bit. 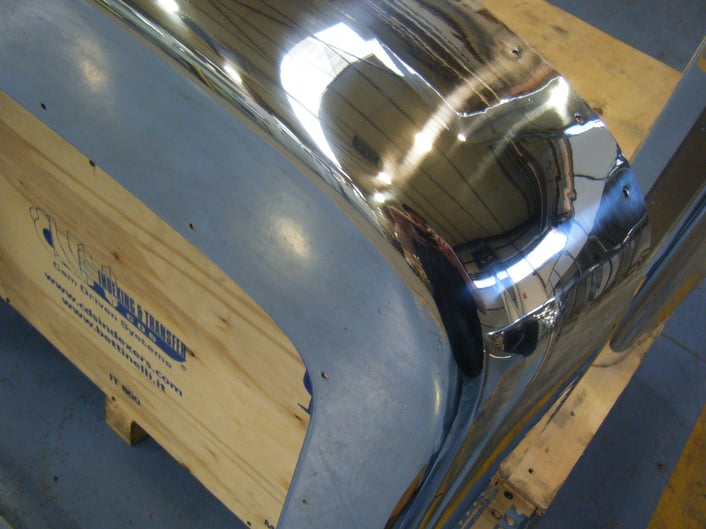 Finishes do not photograph well but looking at the reflected ceiling and floor tell the story. In the end the frequent injury to staff was greatly reduced. The staff were relocated to other parts of the facility where other departments got a needed infusion of help. Part volume was increased and the very high amount of rejects were greatly reduced. In the end this gets more product out the door and in to the customers hands.

There were some choices made here. The machine can process two parts at the same time and each station is independent. You could run just one station alone if you wished and the parts did not need to run at the same time so you could stagger the process. The catch was both stations had to be processing the same part number. To reduce the cost the choice was made to have a single controller for both stations. That would mean only one program could be run at a time. So you had to run the same part in both stations. With separate controllers would would have been able to run a different part in each station at the same time. There are always things that can be changed when putting a system together. Be it to increase speed, reduce cost, reduce labor or add processes there are choices all along the way.

While polishing is a different animal compared to sanding or grinding the process to get to the end result is much the same. In some cases its a need for more volume and in others it could be injury reduction. There are a number of reasons to automate a finishing process and rarely are two situations the same. There is no magic machine that can do it all while making you lunch. You have to look at every aspect and find a balance that will get you where you need to be. You may want more speed but it could come at the cost of flexibility. Is that a trade you can live with? Also look to the future for possible part or volume changes and keep these points in play during the initial process.

As always I hope there was some useful information and if you have any questions or need a guide for your journey into automation please feel free to contact me. Be it polishing or sanding you can automate just about anything and find success.