Why are wide belt grinding machines SUCH energy hogs?

Why do belt sanders use more energy than disc sanders? Read on to learn more.

We’ve staked our claim to fame on our incredibly low operating costs, and in all of our cost of operation worksheets we discuss how much more expensive wide belt grinding machines are to run when compared to a Loewer DiscMaster.  It’s worth understanding how the machinery works and why conventional machinery uses so much more electricity.

There are three primary factors that contribute to energy consumption; Mechanical friction from moving parts like chains, rollers, wheels, bearings and belts; friction between the abrasive belt and the part surface; and heat generated through the manipulation of the belt (which can be significant in some instances).  Larger machines with more bearing surfaces and heavier parts create more mechanical friction.

Have you ever bent a piece of metal (like a bolt) back and forth until it broke?  It’s always warm at the point of fatigue.  Flexing a belt around the drive and contact drums also creates heat.  This heat is a result of the internal stresses on the fabric of the belt but because the belt is large and spread over a large area, the heat generated goes unnoticed by the operator.  Heat generated through deformation is also generated in the contact drum where soft rubbers are forced to deform at high speeds as they come in contact with the part through the abrasive belt.  It makes no difference that this heat was created by internal friction because the laws of conservation of mass-energy tell us that in a closed system, energy can be neither created nor destroyed.  The movement caused the heat, the motors caused the movement, and the power to turn the motors came from…Your wallet.

Most significantly, a large amount of energy is required to grind a large surface area quickly.  If you’ve ever sanded steel by hand, you’ll know how much effort it takes to grind out a weld.  Consider that a wide belt machine handles this in a fraction of a second as the part passes under the contact drum and you can understand the amount of power required.  When finishing a flat, square part the width of the machine, it’s not uncommon to need motors with more than 20 horsepower to keep the grinding process going consistently, and some applications can use motors as large as 50 horsepower.  A single 20 horsepower motor draws 27 amperes at 460 volts across three phases at maximum load. To put that in perspective, the power required is 18,285 watts, or about three-hundred 60-watt lightbulbs. 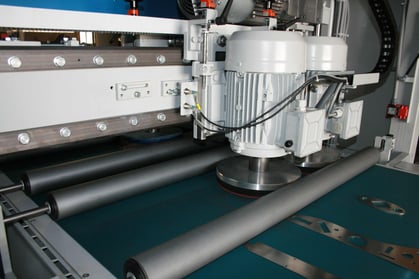 So, what’s different about the Loewer DiscMaster?  For starters, Loewer’s completely cut out most of the mechanical friction by connecting its sanding disc heads to the motors.  By powering each sanding head with its own motor Loewer eliminated much of the mechanical friction associated with transferring power from one motor across multiple heads.  By eliminating the belt, Loewer eliminated a major source of energy loss by reducing heat generated through plastic deformation.  Most significantly, the nature of nonwoven abrasives backed by closed cell foam reduces the amount of friction on the part overall by concentrating the work done to edges, burrs, and protrusions.  Whereas a wide belt grinds the entire surface of the steel, anecdotal evidence suggests that nonwoven abrasives conform to part shapes and seem to glide over the surface of the steel removing imperfections.  In any case, the energy savings adds up to a significant amount that can be measured in amperage draw at the power meter.  The end result from Loewer is a machine that only requires about 35 amps at peak draw.  Compare this to a conventional wide belt at 100A+.  Please keep this in mind when you make your next machinery purchase decision and consider moving to a greener (and much less expensive!) way of deburring your metal parts.

Learn more about how a Loewer Deburring machine can and will deliver substantial savings.